Coinbase NFT Waitlist & How To Prepare For Its Release

In 2021, we witnessed how NFTs got the spotlight within the crypto sector. Some keep looking at them as memes or fads, others are making millions off of them. Truth is, they are here to stay, no matter what anyone thinks, so why not explore them. With so many NFT marketplaces coming out almost every week, Coinbase is also looking to join the fun, offering you to opt-in for their waitlist.

If you are not familiar with the sector but are interested in learning more, we suggest going through our dedicated informational NFT article.

Coinbase is one of the biggest crypto exchange platforms on the market. It is especially well-known in the US. According to the official website, the platform has nearly 90 million unique accounts. Because of this, many are impatiently expecting the launch of Coinbase NFT.

We can certainly see why it can be the next big thing when it comes to NFTs. Its been rumored that they will be adding many unique features, never seen before. This includes the option to pay for an NFT using a MasterCard. Additionally, upon launch, only Ethereum-based NFTs will be supported.

Keep in mind that although crypto won’t be needed, you will still need a crypto wallet that supports NFTs to store your asset at.

At this moment, there are more than 3.7 million users registered for the waitlist. The reason you might want to do it too is that you will be one of the first to know about its official release date and be able to see the marketplace before most.

Signing up for the Coinbase NFT waitlist is actually quite easy. However, there is a catch. A big one. You must be within the US in order to register for it. Yes, quite unfortunate, but for now they do not accept people outside of the US.

This narrows down the users who will be getting the invitation link once the platform launches. Of course, this is great for US users, but not so much for everyone else. However, after launch we expect it to be available worldwide, although there is no official information regarding that.

With that out of the way, let’s get into it:

After you’ve signed up for the waitlist, you can refer friends, using the link provided in the email by Coinbase. You will not be able to know how many people you’ve referred, but your position will be shown on the NFT website above.

The position will keep changing throughout the course of the referral campaign. However, the more people you refer, the higher you will be climbing on the “leaderboard”. This is important, because the closer you are to #1, the faster you will be getting access to the Coinbase NFT platform.

The Coinbase NFT platform is coming out in 2022, according to the official website. However, there is no official launch date stated anywhere. This is exactly where the waitlist comes into play. Those who receive the invitation email will get more news regarding the platform before anyone else.

It also appears that there will be something similar to “early access”, only for those invited. This means that they will be able to use the platform before anyone else and before the official launch.

At the moment, the official Coinbase Twitter account stated that they are working with more than 100 content creators to help them during the launch. It is not specified whether they mean social network creators or actual NFT creators.

We will dare to speculate here as there are a couple of indicators that might help. As we are almost through Q1, it appears that the launch is nowhere around. This is because there is nobody yet using or officially testing the platform yet.

After that, there are nearly 4 million users waiting for their invitation link. Before an official launch date, they must obtain their links. This will definitely take more than a week or two.

Even before any of these 4 million users is given access, the 100 creators must first add to the platform, or at least we believe so.

All of this means that we can expect Coinbase NFT to launch in late Q3 or Q4, so make sure you hop on the waitlist.

What Makes It Unique

There are so many credible NFT marketplaces out there at the moment. They offer great rates for both the buyers and creators. So why is there so much hype around Coinbase NFT? Well, that’s because it is the biggest crypto exchange platform in the US. It also is quite popular outside of the US.

This gives it an advantage when comparing it to the rest. Most marketplaces do not have a major platform standing as a foundation. However, Coinbase does.

Aside from that, the most unique feature we will be seeing is the option to pay using MasterCard, which is new for the market. Although it is not the first platform to implement that payment method, it sure is the biggest one to do so.

The fact that we do not know about all the features gives Coinbase NFT a competitive edge. These are only a few of the reasons why the Coinbase NFT waitlist is so valuable to jump on.

As we already know, the NFT industry is growing by the day, thus there are already quite a few established marketplaces. Because these already have a certain community, Coinbase NFT will have to offer something better for creators to switch platforms. Also, it will have to present better fees and minting rates than others.

We still have no information regarding the minting, selling, and purchasing processes. Once we do, we will be able to make a better comparison to the rest of the marketplaces. However, for now, we can explore the top 3 biggest competitors Coinbase NFT will come across upon launch.

OpenSea is without a doubt one of the biggest, if not the biggest NFT marketplace. Although it has one competitor that is seeing a bigger daily volume than it, it still remains at the top by average number of traders per day.

The platform supports free minting on images, GIFs, audio & video files, and 3D models. Unlike other NFT marketplaces, OpenSea does not take fees before the selling of an NFT, thus creators don’t need to worry about that. However, there are some gas fees when minting an NFT and when a buyer obtains a new NFT.

One of the biggest advantages that OpenSea gives creators is its residual royalties. This means that the creator of the NFT will be getting royalty for every single re-sell of their art piece.

If we have to choose one competitor to test Coinbase NFT’s might, that would be OpenSea.

Although less than half a year old, LooksRare is a marketplace that is seeing enormous daily volume. This is possible due to its dedicated community and the unique features it is offering. Just like OpenSea, it supports the same type of files, thus offering creators a lot of choices.

Its most exceptional feature is that the platform has its own token – LOOKS. You can stake the token and get rewards for it. You will be getting LOOKS every time you purchase or sell an NFT. LOOKS stakers share all transaction fees the platform generates.

You will even implement smart contracts when it comes to selling and buying, pretty soon according to the official website.

LooksRare is currently getting only around 600-1000 daily traders. However, they are responsible for a daily volume of more than $100 million. This means that the average trader is going for at least $16.000 worth of trades.

Of course, this is mainly because of the LOOKS distribution system, thus the community can trade amongst each other for profit.

Magic Eden is a bit different from the rest, as it it resides in the Solana ecosystem. This means that NFT art pieces can be purchased using SOL (Solana’s native cryptocurrency) only.

There are many benefits to the Solana network, as you probably already know. It supports more than 50.000 transactions per second, making it the fastest ecosystem. Additionally, the fees are quite low, so the network is perfect for an NFT marketplace.

Magic Eden offers a 0% listing fee for creators and only 2% transaction fee when a buyer purchases an NFT.

Even though smaller than the competition, it is definitely worth checking Magic Eden out.

With every passing day, we are one step closer to the official release of Coinbase NFT. However, we might have to wait for a while for that moment to actually arrive. In the meantime, make sure you are part of the Coinbase NFT waitlist, so you can get early access to the platform.

There is no doubt Coinbase will introduce many innovative features for buyers, as well as for creators.

Although at the current moment, the crypto market is seeing a big dip, the NFT market is almost unaffected. Such situations just show how autonomous the sector can be, which puts things into perspective. While some are accumulating cryptocurrencies, others are accumulating NFTs.

Even though it is a riskier investment, there are already many who are making a living out of buying and selling NFTs.

The NFT industry is a wonderful thing that will surely keep blooming and see more utility in the future. With that being said, we hope you enjoy exploring it. 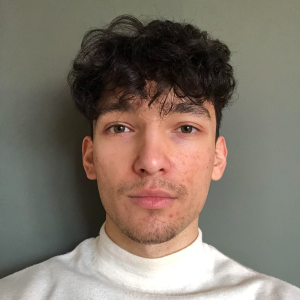 Viktor is a cryptocurrency enthusiast, who also keeps a close eye on news regarding other financial markets. He's been actively involved in research and content creation concerning the latest crypto trends, the stock market, and investment possibilities for more than 3 years.
Crypto