Three Reasons You Want to Start Asking “What If?”

The Value of Asking “What If”

Asking “what if” can save your career, your happiness, and even your life.  Contrary to having a negative effect on your peace of mind, the question is a robust catalyst for mental health and success.

First time I tried to pass on this exciting tidbit to a friend, she rebuffed it with, “Oh, I don’t think so.  Every time I ask that question it brings me down.”

No doubt, Dr. Travis Bradberry, co-author of Emotional Intelligence 2.0, agrees with her.  He posted a blog advising readers to avoid asking “what if?”  Referring to a negative focus, he wrote, “What if?’ statements throw fuel on the fire of stress and worry.”

My perspective is different.

Statistically, one in four Americans in any given year will struggle with a mental health issue.  For one in ten, that struggle is severe depression.  Nearly 500,000 people are hospitalized for intentional self-harm each year.  As a survivor of major depression recurrent and attempted suicide, I know the value of asking, “What if these mental health professionals are right?  What if I can develop a meaningful life?”

You may not experience depression or any mental illness.  Perhaps you have or currently deal with such a struggle.  Regardless whether you desire to advance your career or ease your emotional pain, there are three reasons not to run from the potent question, “What if?” Three Reasons You Want To Start Asking “What If?”

1. You Will Find Your Power. What if I am not helpless?

I successfully manage my disease of major depression.  From nothing will ever change, to I have options, asking “what if?” reveals my power of choice.

Let’s take my friend Benni as an example of this.

Like me, Benni also was certain of her helplessness.  After switching majors three times, she did not finish school.  She carried a torturous load of student debt, and found no suitable job in her financially hard-hit town.

It was 2010.  To hear her tell it now, she fell victim to her times.  While her friends moved away, graduated from college, married, and began their careers, she accepted a minimum wage position and moved back in with her parents.  There she watched television while her life passed by.

In general, her belief was “I cannot.”  I cannot make enough money to buy a car to find a better job.  I cannot finish school because my debts are already too high.  I cannot afford to leave my parents’ home.

Eventually, she was evicted for neglecting her responsibilities.  Sleeping on a friend’s couch, Benni knew circumstances had to change.  She needed a different perspective.  She began to think, what if I could and it will be difficult?

Benni worked harder at her job, and earned two promotions and raises.

What if I can ask people to help?  Led her to an affordable car.

What if I can afford a place?  Motivated her search until she found the apartment she enjoys.

What if I can lower my debt?  Opens the possibility of finishing her education.

2. You Will Overcome Paralyzing Fear. What if I survive?

Fight or flight are two of our responses to perceived threat.  There is also freeze.  When we fear failure, rejection, humiliation, or the like, our mind might temporarily go blank.

We sometimes joke about these incidents such as when we cannot remember the answer to an on-the-spot inquiry.  On a more significant scale, fear can usurp our ability to function or think with reason.  Phobias are good examples.

Richard occasionally becomes overwhelmed with thoughts that his life may soon end.  Richard does not have a terminal illness.  His job is not dangerous.  There is no reason outside his obsessive thinking to believe death is imminent.

These false premonitions derail his career because when his fear is strong he sees little purpose in hard work.  He figures it is pointless to push if he will not reap the benefits.

Recently, he began to wonder, what if I survive?

By challenging the assumption of an early demise, Richard is slowly overcoming defeatist behaviors.  He makes more contacts and sees financial improvement.  His struggle is ongoing, and by enlisting “what if?” he is shaking up the status quo.

Fear of change may paralyze some people.  We may believe we are too old, too young, too fat, or too skinny for anyone to take us seriously.  We can blame the idea we are overqualified or under qualified for our lack of commitment to work.  It is easy to claim no one is listening when we are afraid to talk.

Fear can freeze us into inaction.

I have learned to question, what if I were to try what I have never before tried?  I have survived failure before, what if I can do that again?

3. Hope Will Propel You Forward. What if I there is more?

Sitting in a circle with ten of America’s vast array of citizens, I saw wealthy women sharing the same concerns as money-strapped men.  Young adults listened with compassion to the elderly.  Members of the LGBTQ community received non-judgmental empathy from Christians.  Size, race, gender – none of it mattered.  We united in searching for solutions to our common problem – we needed to get well.

Depression, anxiety, and addiction – all played roles in our struggle.  We shared a sense of hopelessness about life.  I believed no reason existed for hope; there had been too many losses with only more to come.

The psychologist said, “What if your negative beliefs about the world and yourself can change?”

I responded with a shrug.

Many symptoms of depression and other mental disorders clearly interfere with normal functioning.  Lack of motivation, low energy, and physical and cognitive slowness are often confused with not trying.  That assumption is wrong.  People with a mental health issue cannot snap out of it simply by choosing to be positive.

At each individual’s pace, asking, “what if?” can lead to healing and recovery.

By disputing what seems true, alternatives gradually appear.  What if I find help to leave an abusive relationship?  What if I learn new skills and land a better job?  What if I have value?

Hopelessness can invade the thoughts of anyone.  A child learning to ride a bike feels like she will never catch on.  A musician doubts a band will discover him.  A doctor runs out of treatment ideas for a difficult disease.  We empty of energy, time, and skill on occasion.  In those situations, “what if?” will bring options into focus.

Five and a half years after believing my life held no purpose, I am a busy mental health and recovery advocate.  My greatest joy is sharing hope with people who have lost theirs. No longer is there a sense of worthlessness.  In its place is gratitude for a second chance.

None of this was in my imagination until someone started asking “What if?”… 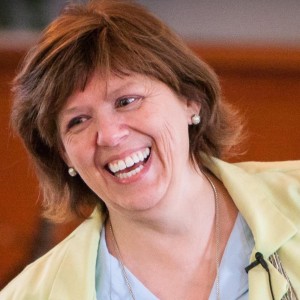 Nancy Virden is a three-time author, Mental Health and Recovery Advocate, and founder of Always the Fight Ministries. Her website is NancyVirden.com.